A PHP Error was encountered

Message: The each() function is deprecated. This message will be suppressed on further calls 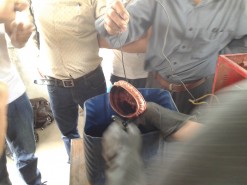 Patina is a thin layer that variously forms on the surface of stone, on copper, bronze and similar metals (tarnish produced by oxidation or other chemical processes), on wooden craft (sheen produced by age, wear, and polishing) or any such acquired change of a surface through age and exposure. On metal, patina is a coating of various chemical compounds such as oxides, carbonates, sulfides, or sulfates formed on the surface during exposure to atmospheric elements (oxygen, rain, acid rain, carbon dioxide, sulfur-bearing compounds), a common example of which is rust which forms on iron or steel when exposed to oxygen. Patina also refers to accumulated changes in surface texture and colour that result from normal use of an object such as a coin or a piece of furniture over time.