A PHP Error was encountered

Message: The each() function is deprecated. This message will be suppressed on further calls

Trade fairs, also called trade shows, are an    important instrument in the sourcing and    procuring process. A trade show is a marketing   tool to access new markets and to encourage

Trade facilitation has been widely used to cover all sorts of non-tariff measures that impede the mobility of goods and services. While there are various definitions of trade facilitation

In 2015, the total global silver jewellery production hit a historic high of 226.5 million ounces (7,045 tons), out of which 67 per cent was produced in Asia. India is the world’s top silver

The Nepal Trade Integration Strategy (NTIS) was launched by the Government of Nepal (GoN) with the aim of promoting trade focused economic growth of the country. Over the years, the

The export of goods from Nepal to other countries is governed by a number a laws and regulations. Exporters have to comply with these rules and have to follow specific procedures. The following outline Nine Steps of Export Procedures provides the most essential steps of the exporting process, including the documents that exporters need to make available. In addition, important links are also provided. 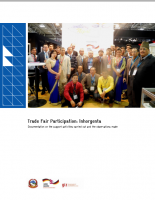 Trade Promotion Programme (TPP) is implemented under the guidance of the Government of Nepal, Ministry of Commerce and Supplies (MoCS) and supported by the Deutsche Gesellschaft 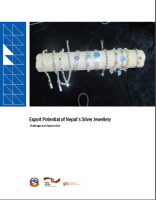 Nepalese silver jewellery is famous across the world for its quality and artistic designs. Silver ornaments from Nepal are exported to various countries around the world as high value articles of its trade basket, generating income to the producer and valuable foreign exchange to the government.

Silver jewellery is one of the major handicraft items exported from Nepal. According to the Federation of Handicraft Associations of Nepal (FHAN), in fiscal year (FY) 2009/10, 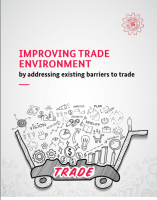 Nepal’s recent history poses a strange developmental paradox. Many countries in the world have experienced rapid growth but modest poverty reduction with income concentrated in the hands of the wealthy. Nepal, however, has the opposite problem with modest growth but brisk poverty reduction

Trade has been well recognized globally as an important driver of economic growth and inclusive development. Over the years, Nepal has taken a series of initiatives to promote exports so as to achieve sustainable and inclusive economic growth, poverty reduction, and improvement in the 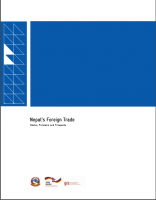 Aid for Trade (AfT) is the World Trade Organization’s (WTO) initiative for supporting the Least Developed Countries (LDCs) to increase their capacity in trade.AfT helps LDCs to benefit from the WTO agreements to expand trade by supporting with trade related skills and infrastructure.
Further, AfT emphasizes its support in the export of goods and services,
in LDCs’ integration into the multilateral trading system

With more than 30 per cent of Nepal’s populati on living below the poverty line and despite recent improvements, poverty reducti on remains the greatest challenge for nati onal development. Poverty reducti on will require ‘inclusive growth’, which is predicated in part on improvements in politi cal stability and governance. But ‘inclusive growth’ is itself a prerequisite to consolidati ng peace and security.
Using a broad deﬁ niti on of exports, to include not only export of goods and services,

Nepali artist famous within their own community, sell their work privately to some specific international buyers, and therefore, exotic art and exceptional artists are not being recognized by others. Because of such circumstances, historical records of artists and their works are not being maintained. Artist should be considered as ornaments of the nation. Their names and creations should be showcased, 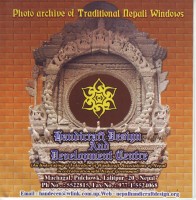 Kathmandu Valley stands a testimony to ancient Nepal’s inclination toward the aesthetics so could be considered as an open live museum of exclusive artefacts which explore the medieval art tradition of Nepal. Those remarkable exquisite arts not only bear aesthetical value, but the social, religious as well as economical significance could also not be debarred. Such extraordinary arts,